Stylist Elle Olsen lives in fear of someone discovering her secret identity as Princess Eloise. But the men who killed her entire family in a bloody coup have done just that and now they’re coming for her. All Elle wants is to disappear into anonymity again, but the panty-melting billionaire who kidnaps her isn’t about to let that happen.

On the society pages, smoking hot financier Dominick Rasmussen is one of the world’s most eligible bachelors, but there’s more to him than meets the eye. As a secret resistance fighter, his one goal is to get Princess Eloise on the throne and restore the monarchy. The biggest problem? His stubborn and sexy undercover princess has no interest in ever wearing a tiara again.

Their goals couldn’t be more opposed, but neither Dom nor Elle can deny the attraction bringing them closer together. As the stakes rise and danger increases, they are forced to choose between love and country…

His Undercover Princess Sneak Peek
The strain in Dom’s voice could have been from her escape attempts, but Elle doubted it. The bastard wasn’t even breathing hard. Time to switch tactics. Instead of sinking her nails into the steel band he disguised as an arm, she inhaled a deep breath. As her lungs expanded, her boobs pressed against his forearm. He went perfectly still. Interesting. Now this was something she could work with. He could overpower her in a heartbeat, so she had to use whatever tools were at her disposal to distract, disarm, and defend. If Mr. Hard Body got a hard-on, that could very well be her ticket to freedom.

She lifted her chin, letting her left cheek rub against his hard pec as she tilted her face upward, and tugged at her bottom lip with her teeth as if she was a little slow and trying to work out all of the confusing details when in reality she was already ten moves ahead. “So while the world thinks of you as a real-life Bruce Wayne with hundreds of millions in the bank and models draped across your arm, you’re really Batman, aligned with the Resistance, and you kidnapped me for my own good?”

“Isn’t that what an assassin would say in such circumstances?” She batted her eyelashes.

He narrowed his gaze, but his lips twitched as if he were fighting off a smile. Shit. That might have been a step too far. Sometimes dialing down the drama proved harder than expected, but it was too late to pivot from her course now. She needed a second or two to break free—after that she’d figure it out.

“If you were on my hit list,” he said, his voice low and soft, “you’d have been dead before you even got to ask me my inseam.”

Thirty-four. The number popped in her head faster than an appropriate response.

“And if by ‘such circumstances’ you mean totally under my control…” His fingers brushed her hip as he dipped his head lower so his lips almost brushed her ear. “If that was the case, then I can’t say I’d really be looking for talk.”

His words tickled her sensitive skin, heated her flesh, and made her mouth go dry. Then he shifted his stance and something hard, long, and thick brushed against her ass before moving away. She dropped her gaze and bit her lip for real this time. It was either that or moan in protest. The man had a smart mouth, a hard body, and questionable motives. In short, he was exactly what made her panties melt.

“Are you sure you really want to play this game with me?” Dom asked, his lips so close to her ear she could practically feel them. “I promise, I’m much better at it than you.” 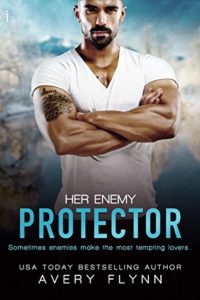